Kimberly Wyatt is the winner of Celebrity MasterChef 2015.

After four weeks of heats, two weeks of gruelling semi-finals and finals, and an incredibly tense final cook off, Kimberly Wyatt (33) was awarded her trophy by judges John Torode and Gregg Wallace.

Pussycat Doll, Dancer and Television personality, Kimberly Wyatt said: “I haven’t felt this good in a really long time! This has been one of the greatest experiences of my life. The whole reason for being in MasterChef was because I am a new mum, and to create something for my little Willow to look up to, and I think that’s what this represents!”

John Torode said: “There’s a Pussycat who got her claws firmly into this competition and didn’t let go! Kimberly was daring, she pushed and she always did something that was a little bit on the edge.”

He added: “Kimberly’s food has changed to stuff which is refined, really interesting and very elegant.”

Speaking on the final Gregg Wallace said: “I think Kimberly today was extraordinary, from the lady that came in here giving us berries and fish to the sort of food she is now presenting is incredible.”

Throughout the final week Kimberly, alongside other finalists Rylan Clark and Sam Nixon, had to demonstrate her creativity, skill and determination as the finalists faced a series of exceptionally tough final challenges.

These included: surviving John Torode’s highly complex Palate Test, producing a two course menu for the infamous restaurant critics, and one of the toughest and most daunting challenges of the competition – The Chef’s Table; this year cooking a Michelin standard three-course meal hosted by Michelin starred chef Angela Hartnett, for an all-female table of undoubtedly some of the best culinary talent in British kitchens.

The final task was to cook and present a faultless three-course meal for judges John Torode and Gregg Wallace in two and a half hours. Kimberly’s winning menu consisted of a starter of Seafood soup with a mussel and chive based broth, parsley Jersey Royal potatoes, mussels, clams and pan-fried scallops, a main of Loin of Lamb cooked in a salt crumb, served on a bed of spinach with celeriac puree, roasted shallots, and Jerusalem artichokes and a cherry tomato, rosemary, garlic and balsamic olive oil sauce, and a dessert of Sinatra Cheesecake – her way; a baked vanilla cheesecake with hazelnut crumb and poached rhubarb, topped with a rhubarb foam.

Of her MasterChef journey Kimberly said: “I’m absolutely elated, this has been one hell of an experience, and I have definitely learnt so much. It’s been an incredible challenge.” 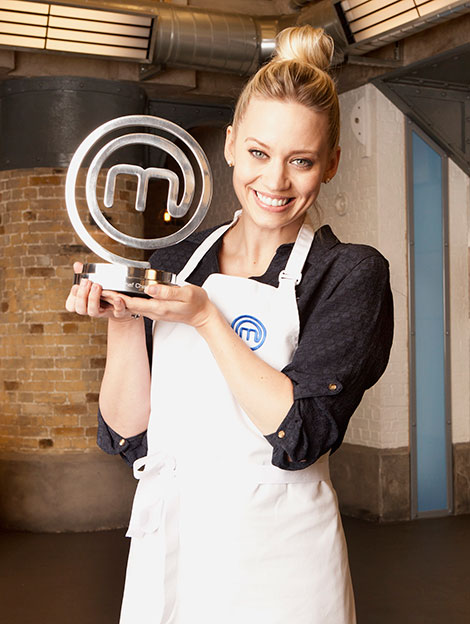