I just became a Triathlete!

Yup, I did it!! I did the World Vitality Triathlon in Hyde Park!! Crazy, right!? I braved the Serpentine; cycled past the point of exhaustion and even found it deep down within to sprint to the finish! Although I must admit, the overwhelming feeling of potentially losing my cookies did wash over me about 3 times when I stopped! Don’t worry, I kept it down, nobody noticed I don’t think, thank goodness! Gross!

It wasn’t easy. Finding the time to train amongst the Mummy Juggle and career obligations was so difficult. I did what I could when I could and my Mum on a Mission Workouts gave me the HIIT training I needed to get through it! Short bursts of high intensity fitness for 40 seconds with 20 seconds active recovery helped me build strength and work on my stamina. Even though it’s just 24 minutes a day the consistency of dance infused circuit training meant I was working all my muscles all the time, which was good because I needed ALL of them!

The swimming portion was tougher then I ever imagined! Initially I was worried about getting into the cold water; however THAT was a piece of cake! Mother Nature decided it would be hilarious if it started chucking down with rain before my heat started. Nice little joke she played on me! Thanks for that, Cheers! So the very wet me went from freezing, teeth chattering outside of the water to jumping in, floating and waiting for the starting horn, still freezing and teeth chattering, so not a massive difference really.

From there I went from the mindset of winning, to the challenge of finishing in a matter of about 15 strokes! The washing machine effect as everyone starts, I was warned would be atrocious wasn’t actually that bad. I put my head down and swam hard to get out in front. It worked!! I was winning! Nope, wait a minute, after just a few more strokes and breaths I was clobbered over the head, swallowed water and faced the feeling of needing air badly, or as some call it ‘drowning’.

I watched my winning race start to look like defeat. I had to take a moment to compose myself and find the strength to carry on. I even had a flash back to being on the Piranha’s swim team. I must have been about 5 or 6 years old. I was crying because it was a cold day and I didn’t want to jump into the cold water. I got onto my starting block with tears running down my face, put my hands up in the air, down to the block, waited for the gun to fire and the race to begin as I wet my pants and as the gun fired I jumped from my little yellow puddle. I came in last because I had a fear of opening my eyes underwater, drifted a few lanes over during my swim and finished last place. I thought that memory was gone… apparently not! In a flash the memory came and went and there I was during my Triathlon, treading water having to find the strength to start again! I was so discouraged!

The buoyancy of the big thick wetsuit was so foreign to me my swimming style suffered a bit I will admit. I even found myself ashamedly doing the backstroke to get to the end… it was my winning stroke in the Piranhas I will proudly say… but not exactly the recommended stroke for the Triathlon. Lol! Even some of the officials in the kayaks were laughing. #embarrassing! Note to self, if you take part again… train in open water in the thick, buoyant wet suit! Although I did get clobbered a few more times I was better able to handle it this time and it encouraged the determination to finish!

Once I finally dragged myself out of the water with a pale face and blue lips I knew it was game on! Time to make up some lost time and get myself ahead of all the people that had just kicked my butt in the Serpentine. I got on the bike and took off like a rocket and never once let off the gas. I kept the pace consistent and even acknowledged a few smiles as I started passing people! I felt like a winner again and I loved it! I kept my head down and my mind focused. I’d let myself down in the swim, I was going to make myself proud on the bike and run, and I did! I felt like Super Mum as I pushed it hard! I was flying by people, I could feel the exhaustion in my legs but my will to do well pushed me on.

The most memorable moment of all was having the finish line in sight. The grand stand of people was cheering and I saw my family and friends in the front row cheering louder then them all in their #TeamWyatt t-shirts! I felt so special, loved, and cared for! #TeamWyatt Thanks guys!! Even little 6-month-old Willow, who had slept through the whole thing, was awake to watch her Mummy finish her very first Triathlon! I mustered up enough determination to sprint to the finish and make them all proud! 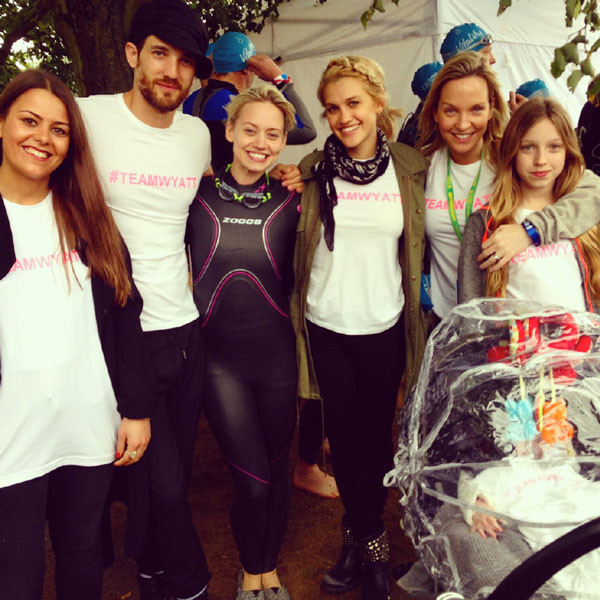 So that is one very big item on my bucket list crossed off! I AM a Triathlete! That feels quite cool! Would I do it again? Hmmmm… give me a few weeks and I’ll let you know cause right now the bruises left from the saddle of my Tri Bike and the faint memories of being super discouraged by my swim are still swirling around in my head. So I’ll live in the glory a while longer, say the words ‘I am a Triathlete’ a few more times since ‘I am a Triathlete’ and see if that smugness just might mean I have it in me to do it again. Cause there is a little voice in the back of my head that thinks a challenge like this is what is needed to test you each year and I encourage anything that makes me feel like I am a better me afterwards.

So for anyone out there that is thinking about doing anything similar to a Triathlon I say DO IT! I promise it won’t be easy but it will be worth that sense of achievement when you reach the finish line, I promise!!