I can’t believe that it’s been TEN Years since I performed at the Teen Choice Awards with the Pussycat Dolls! It was one of our very first big performances and one that I think I’ll always remember! 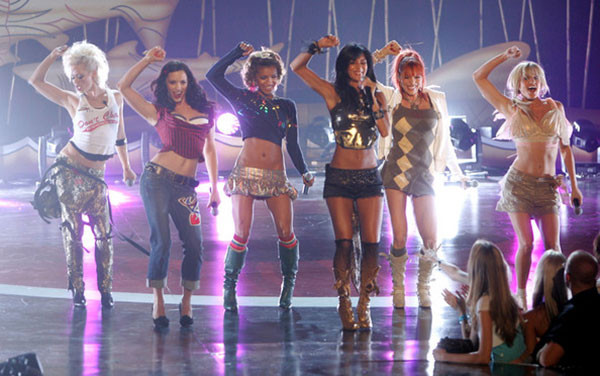 From my days dancing with the Pussycat Dolls I learned that a lot of people go to music for inspiration and answers. Fans of the Pussycat Dolls felt empowered by us. We allowed them to feel safe in their girly exploration of what it means to be a Woman.

PCD empowered me to feel confident and in charge of whom I am and trust my destiny. It taught me what it feels like to be carefree of what people think. It broke down a lot of barriers.

The first time I did a Burlesque Show with the Pussycat Dolls included Carmen Electra and Pink.

Pink was one of my faves and it turned out I was one of her faves as well. ‘She soon had me next to her in her Trouble Video!’

As a PCD – hanging over a big staircase banister in my fishnets, corset, and killer stilettos I felt like a Super Woman of sorts! I felt untouchable. That level of empowerment was so far fetched it was FUN, FUN, FUN!!

Big Spender was one of my favorite numbers. There were about 12 of us in the group at the time and the crowds at the electronics convention called E3 were beside themselves.

To have made it in LA as a Pussycat Doll – a Burlesque Dance Troup born from Johnny Depp’s Viper Room was incredible.

….and I know what you’re wondering…. or maybe you’re not but I can use this as the perfect segue for another name drop in my blog 😛

Yes, I can confirm that I did in fact meet Johnny Depp. We did an indie film he was directing shot at the Viper Room. Our scene was short but I did sit and speak to the man himself. ‘Swoon’

I’ve never seen the indie film surface anywhere but it sure was cool to have done it… I mean it was Johnny freaking Depp!!

I loved it. Sometimes I even miss it. But at this point it feels like a lifetime ago!

Instead of sexy hot dancing… This week I got to surprise a lucky fan with a BBQ! Ribs, Burgers, pasta salad, my artichoke chicken balls, and bbq salmon. Dan seemed very surprised, his family was lovely and we had a really lovely day all thanks to Tesco Flame Academy!

Check it out here: